It’s kind of an eerie thing, really.  I actually remember life before the Big 12 came into existence and now, 15 years later, change is on the horizon.  The landscape of the conference and the Iowa State men’s basketball program has changed dramatically in that time.

Fifteen years ago on March 2nd, Iowa State beat Colorado at home just as they did in 2011.  Fifteen years ago, we were all gearing up for the final Big Eight Tournament with high hopes as the number two seed.  Never having won the Big Eight Tournament before, how sweet would it be to finally get over the hump and win the last edition?  After winning a close first round game against Nebraska 62-60 and beating Missouri in the semifinals 57-53, the showdown was set.  Kansas—the number one seed—victors of the two previous meetings that year by score of 61-50 in Ames and 89-70 in Lawrence, was waiting for round three of the season.

Kenny Pratt was dynamite.  Ed Hightower was officiating pre-toupee.  Dedric Willoughby hit a bomb before the shot clock violation.  Jacy Holloway hit a clutch three in the final minute.  Raef LaFrentz was fouled and made two free throws to take the lead.  Willoughby was fouled and retook the lead with his free throws.  Jacque Vaughn missed a runner down the lane as time expired—barely.  Forever Big Eight Champions.  Take a look at the other conference championships in Iowa State Men’s basketball history. 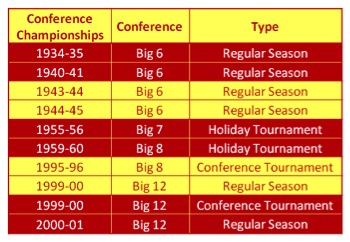 The first ever Big 12 Conference Tournament again provided the Cyclone faithful with high hopes.  The five senior starters all returned from the previous season’s success (lost to the Utah “Keith Van Horn’s” in the second round of the NCAA Tournament).  Iowa State finished the season with the fourth seed and played the fifth-seeded Texas Tech Red Raiders, led by Tony Battie and Cory Carr.  Iowa State narrowly escaped with a 72-70 victory when a half-court heave from the Red Raiders was just off the mark.  (Later in the day it was revealed that Texas Tech was playing with ineligible players and would’ve forfeited the game even if the shot had fallen). 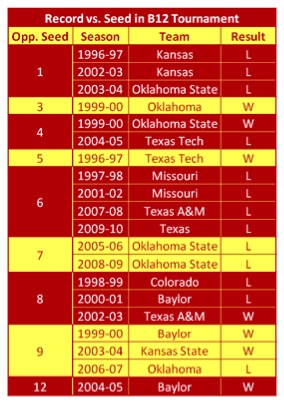 In the semifinal round, the old nemesis, the Kansas Jayhawks were ready to exact conference tournament revenge.  Unlike the previous season, ISU was unable to win the third matchup with the Jayhawks after losing the previous two during the regular season.

Of course, for the fondest memories many Cyclone fans hearken back to the tournament.  The 1999-00 rendition with the top-seeded Cyclones taking down Baylor, Oklahoma State (in a barnburner, perhaps best known for Stevie Johnson notching 21 points and 11 rebounds or Doug Gottlieb getting feisty with Marcus Fizer before each earned a technical), and Oklahoma in succession to claim the title.  That was, and is still the only Big 12 Tournament where the Cyclones won more than one game.  That tournament was also the first time that the Cyclones squared off with Oklahoma State in the conference tournament.  The Cowboys would go on to be the most played team for Iowa State in the history of the Big 12 Tourney. 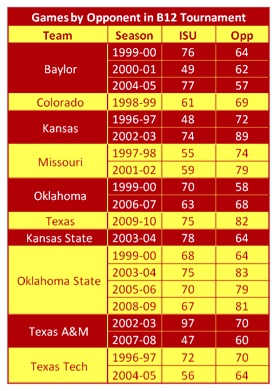 Throughout the rest of the decade, as the seasons and coaches passed through ISU, success in Kansas City (yes, I know it has also been in Dallas and Oklahoma City, but the conference tournament home will ALWAYS be Kansas City) became more and more sparse.  Going from maybe winning the first game to not winning a game at all has left the fan base in an unsatisfied rut.

Some interesting items of note: 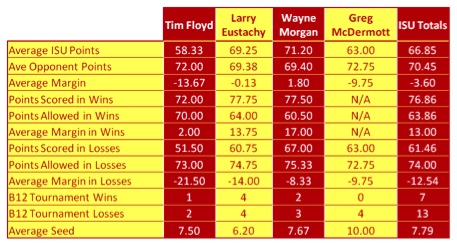 We already covered how ISU has done in the past against opposing seeds.  This year, ISU will be a 12 seed.  It will mark the first time that has happened but the sixth time that the Cyclones earned a double digit seed.  Check out the results by seed over the past 14 years for ISU. 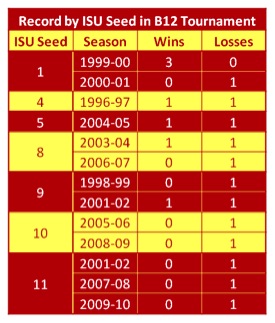 The odds of duplicating the 1996 run and winning the final conference tournament again are obviously long—if not completely impossible.  But winning a game or two is within reach, no matter the seed that is assigned.  I say this a lot, but Cyclone fans are a special breed.  Going to Kansas City is a rite of passage for our fans, even in the down years.  Prior to completing this I re-watched that Big Eight title game against Kansas and one of my favorite stories was recounted.  A woman—and quite obviously a diehard Cyclone supporter—was due any day for the birth of her child.  Her due date was set to coincide with the Big Eight tournament.  So, what did she do?  Like any sane and rational Cyclone, she convinced her doctor to induce her so she could have her child and then bring her less than one week old with her on the trip.

Dedication, loyalty, and sometimes just downright crazy, that’s why we flock to Kansas City.  Hopefully in the coming years there will be more to cheer for, just as there was at the inception of the Big 12.

If you like Iowa State, basketball, and statistics check out this site published by Kirk: www.encyclonepedia.com