There aren’t many people reading this (insert period here for truest statement ever) who haven’t yet heard about Diante Garrett joining the “1,000 point club” in the Iowa State men’s basketball record book.  At the moment, he is 27th all-time with his 1,017 points and within striking distance of Vince Brewer, Terry Woods, Rahshon Clark, and Will Blalock in the very near future—Blalock is 23rd all-time with 1,078 points.  If Diante averages 15 points per game the rest of the way this season, or roughly 20 games, that would put him at 1,317 points, good enough for 16th all-time.  To commemorate this event, this sub-standard blogger will try to make some interesting observations amongst those in this illustrious group.

Had Diante Garrett miraculously not made the 1,000 point mark for his career this season this would’ve been the first Cyclone team since the 1971-72 season that didn’t have at least one eventual 1,000 point scorer on its roster—given what we know now.  Who are the players that make the chain from 1972—present you ask?  I will share:

Note that the closest the streak was to being broken was in the five year stretch where only Dedric Willoughby and Marcus Fizer became 1,000 point scorers.  Now for an overload of charts that I created to look at things from a different angle (yes, I have a sickness).  First things first, well actually second, but here are the career scorers over 1,000 points (to try to make my life somewhat simple I didn’t include Diante Garrett on any of these charts, yet): 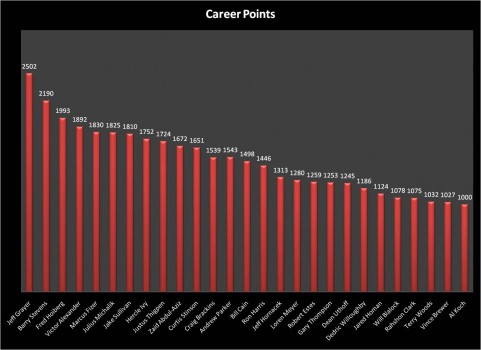 Now, I tend to like to look at things in as close as possible to an apples to apples comparison and that means per game averages.  So, with that, this chart depicts career points per game: 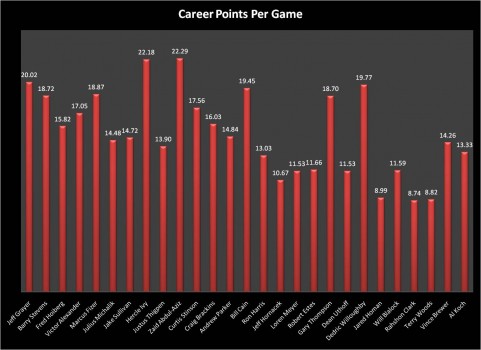 The next few charts will show some interesting ways to look at the career scoring lists, starting with career two-point field goal percentage: 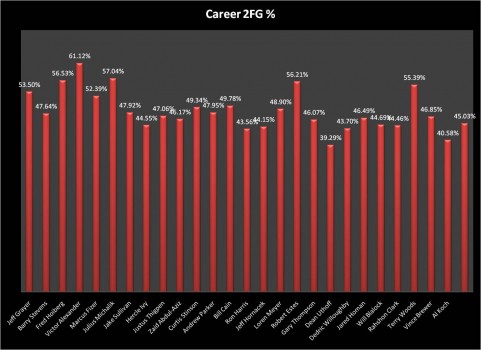 Next is the percentage of career points that came from made three-pointers: 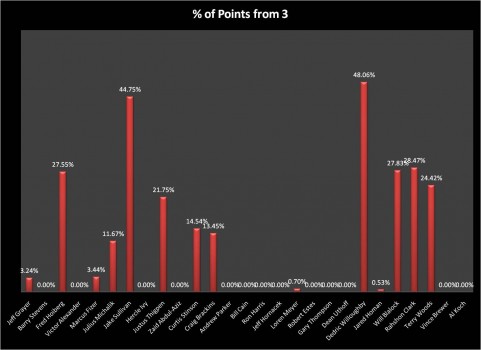 And similarly here is the percentage of career points that were scored from the free throw line: 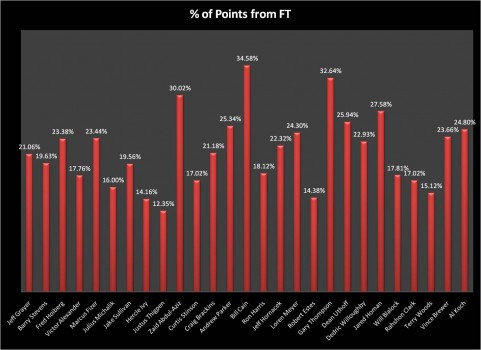 Finally, just for good measure here is the career rebounds per game for each member of the “1,000 point club”: 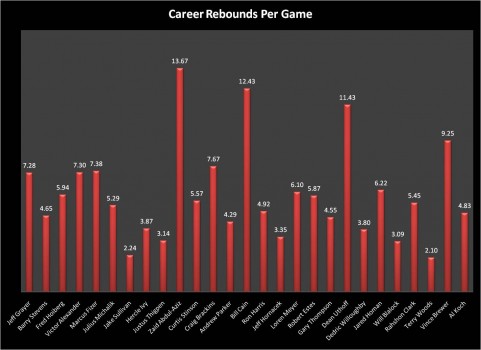 The biggest conclusion I have drawn from all of this is just how dominant Zaid Abdul-Aziz must have been.  As it stands, he is 10thon the all-time scoring list but he is also the most potent of scorers by averaging 22.29 points per game in an era where the three point line didn’t exist.  Also, he was the most productive rebounder from this group on a per game basis—even more so than Dean Uthoff, who is largely considered the best rebounder in ISU men’s basketball history because of his gaudy numbers for four consecutive years.

Those are the noteworthy conclusions that I notice immediately, what are yours?