Here’s a fun question for you to start your day.

Let’s play with a hypothetical situation here for a minute. Pretend that Alexander Robinson was 100 percent healthy during the entire 2009-10 Iowa State football season. What would the Cyclones record have been?

Interesting to think about huh?

Let’s go back to real life here. The words “pretend” and “hypothetical” don’t mean a heck of a lot.

The fact is that last season, Iowa State had little to no depth at the running back position. Sure, Jeremiah Schwartz admirably filled in for A-Rob at Nebraska last season. He didn’t turn the ball over, which is a good thing. He also only averaged 2.3 yards per carry. His longest rush in that game was for seven yards.

God forbid if Robinson were to go down in 2010, it appears that Iowa State will be in much better shape. Iowa State’s running backs coach Kenneth Pope has a loaded group and the best part is, they all do different things well.

“Right now, the number two guy is Jeff Woody,” Pope told CycloneFanatic.com earlier this week. “The good thing about this is the fact that I really feel like we have some talented guys. It is a stable of guys who can really play. I tell those guys all of the time that I want to be in a situation where I can stand in front of Coach Rhoads and say that I have six guys who are ready to play. That is my job and what I am trying to do right now.”

Right now, it is fair to call the buzz around freshman Shontrelle Johnson hype. It is also fair to call it pure excitement. Iowa State’s top recruit in the class of 2009 has probably been the most talked about Cyclone in this summer’s camp so far, on this message board at least.

I don’t have a problem with that either. Some people get upset with this.

“He’s never taken a snap in a college game before,” the skeptics will say. “How can you put this much pressure on a kid to succeed? That’s not fair.”

If you find yourself making those comments, please spare me. Johnson told me himself that he expects to play and play very well this fall for Iowa State. Why blame fans for being excited about a member of their favorite football team? I don’t get that.

How has Johnson looked so far in camp? Pope has been impressed.

“He is so quick and is so explosive. The thing that he brings to us is a guy who has a lot of movement. He’s a guy who can make people miss in space. That is the thing that excites us,” Pope said. “For a freshman, he really doesn’t act like a freshman. The thing that makes me really excited about him that I didn’t know until he got here is how physical he is. You don’t find many guys who come in at this early of a stage who are physical guys. We have done some drills with the linebackers and he has held his own.”

“We’re going to find out a lot more once we get into that scrimmage situation. Right now, I am really excited about the things that I see with Shontrelle,” Pope said. “The thing that makes him so special is the fact that he is such a physical young man. I feel like physically, he is ready to play a game. I feel like mentally, I have to get him ready to play. If he is mentally ready to play a game, he will be able to help this football team this fall.”

Iowa State will hold its first scrimmage on Saturday afternoon. 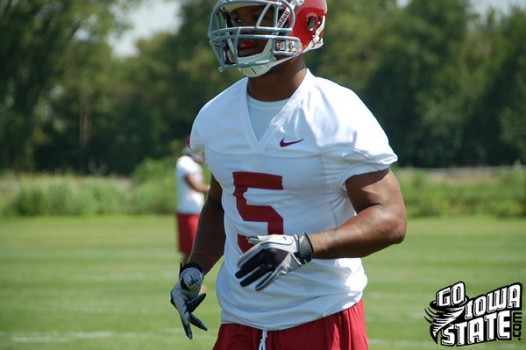 It is easy to see why Iowa State’s coaching staff loves Jeff Woody so much. He’s consistent. With Jeff Woody, you know what you are going to get.

“I use the words trust, smart and accountable,” Pope said while describing Woody. “He is all three for us. Jeff understands the offense. He understands his role. He is going to do quite of things for us. Jeff is really good running in between the tackles. He’s a physical guy. He makes great cuts and is explosive. That’s the thing that I like about him.”

James White and Beau Blankenship appear to be the two other Cyclones in the mix for the number two spot on the depth chart. Blankenship, like Woody, isn’t flashy but provides a physical presence in Iowa State’s backfield. Meanwhile, White is a slasher who provides immediate big play ability.

Don’t sleep on freshman Duran Hollis either. Pope commented on how Hollis has impressed him early on in camp.

My take? I love the thought of mixing it up here. If he is ready, give Johnson his touches. Let Woody be your third down, tough yardage back. Give White a chance to break a play open. Let Blankenship go out there and hit somebody.

All of the above will take pressure off of Robinson and hopefully, keep him injury free.

At this point, it doesn’t really matter who is number two on the depth chart come Sept. 2. What matters is that at running back is that Iowa State now has options. They didn’t a season ago.