This year’s NBA draft is looming now that the “BASEketball” length season has finally ended.  Iowa State is currently on its longest drought of no players being drafted since the gap between 1991 (Victor Alexander) and 1995 (Loren Meyer & Fred Hoiberg) and has not had a player selected since 2006 (Will Blalock).  That is expected to change on Thursday with Craig Brackins and possibly Marquis Gilstrap. Below you will find some of my oddities and observations from previous drafts in which Cyclones were selected. I’m sticking to the modern era (I deem this as anything 1985 and later) for the sake of simplicity, convenience, and relative interest level.

The landmark recruit for Johnny Orr to get the ship turned around and the creation of Hilton Magic was selected late in the second round.  Some of the notable players that were selected before Stevens:

#10 Ed Pinckney – He gets a mention due to the rumors a month or so back that he was a candidate for an assistant coach with ISU.  He played on the 1985 Villanova National Championship team and has been a long time NCAA assistant coach.

#31 Manute Bol – Mr. Bol gets his mention posthumously after his death this past weekend—tremendous humanitarian for his Native Sudan.

There really weren’t any drafted.  From the undrafted free-agent pool though, you will find Arvydas Sabonis (I bet he was a mega-stud in his prime) and Anthony “Spud” Webb. 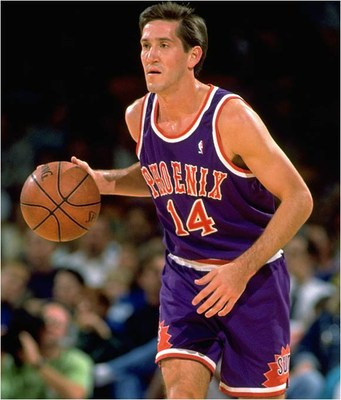 Hornacek was another of the early catalysts that vaulted the Cyclones onto the national scene.  Hornacek was one of only five players drafted in the first two rounds that later played in an NBA All-Star game.  Some notable selections before Hornacek:

#2 Len Bias – The selection of the Celtics that died far too young.

#8 Ron Harper – The star player for the Miami of Ohio squad that was bounced from the first round of the 1986 NCAA tournament, courtesy of a Jeff Hornacek bomb at the buzzer in overtime.

With the 15thselection in the fifth round, Jay Bilas was drafted by the Dallas Mavericks.

The all-time leading scorer in Iowa State history and new assistant coach, Grayer was the continuance of the pipeline to Flint, Mich. (following Stevens)  Some of the players selected before Grayer:

#15 Gary Grant – Michigan guard that lost as the two seed to the seventh seeded Cyclones (or the “jv squad” as the play-by-play crew dubbed them) in the second round of the 1986 NCAA Tournament.

#32 Charles Shackleford – Along with Del Negro, both were members of the 1986 Jim Valvano led North Carolina State team that knocked ISU out of the 1986 Sweet 16.

#42 Jeff Moe – Moe was a scrappy Iowa guard that had reputation similar to that of Jacob Jaacks.

Big Victor was stranded on some Iowa State teams that lacked talent in the backcourt but he still managed to become the third all-time scorer at the time (now fourth).  The notables selected before Alexander:

#12 Greg Anthony – That concludes what was basically the entire UNLV squad being drafted in the first 12 spots after their great two season run.

Technically none of the guys listed so far or guys that will be listed need any introduction, but that is especially true for these two Iowans.  Meyer, the Ruthven native, never quite caught on in the league long term.  The other guy, though, did alright and I heard is now close to the men’s basketball program.  The notables selected before Meyer:

#4 Rasheed Wallace – Wallace, Stackhouse, and the rest of the Tarheels eliminated Hoiberg, Meyer, and the Cyclones in the second round of the 1995 NCAA Tournament.

#5 Kevin Garnett –He rejuvenated the prep-to-the-pro route and turned out okay.

#34 Andrew DeClercq – DeClercq and the rest of the Florida Gators lost to ISU in the first round of the 1995 NCAA Tournament.

#42 Donnie Boyce – The Colorado star never recovered from his nasty leg break in his final year in Boulder.

#47 Tyus Edney – Along with O’Bannon from above, they combined to lead the Bruins to the 1995 NCAA National Title.  Although Edney had to sit out the title game and back-up Cameron Dollar took his spot—yes, that Cameron Dollar, from the 1997 ISU loss to UCLA in the Sweet 16 where he made a last second shot over the fingertips of Kelvin Cato.  Edney and O’Bannon also combined to bounce Iowa State from the first round of the 1993 NCAA Tournament.